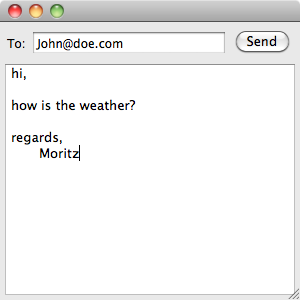 still to much code to achive one small window .

Nice - I'm working on a DSL for JavaFX 2.0 using xText (http://www.efxclipse.org/fxgraph.html). What I'm not sure it is a good idea is if one should mix UI-Construction and Behavior in the same code

55 lines isn't that much (try a gui generator), more important is that the code is readable.

Besides this, the example is more about showing how the closures work in Xtend.

If was wondering what this line does:

Also when swt properties are left out, does this give sane defaults. Can Xtend change this?

I also tried to make a simpler approach without the closures. Could some of it applied to default code:

@tomsondev:
What I'm not sure it is a good idea is if one should mix UI-Construction and Behavior in the same code

Yes, that's reasonable for larger applications. I didn't do it for my example because I wanted to keep it as simple as possible.

@skin27:
If was wondering what this line does:
import static extension blog_001_xtend_and_swt.XtendSWTLib.*


This line makes all static methods from Java Class XtendSWTLib available as extension methods. In the example that are methods such as newLabel(...), newShell(...), etc.

Also when swt properties are left out, does this give sane defaults. Can Xtend change this?

Since this approach uses self-defined library methods (defined in XtendSWTLib), you can introduce any defaults you like. Xtend itself is agnostic of SWT.

About your code example:
You're avoiding closures by implementing the behavior directly inside the applications message-loop. This approach may lead to bloated code once the application gets larger because there is only one message loop per UI-thread. Event handler (independently of whether they are implemented with closures or java classes) solve this elegantly since they are registered on the widgets and since they don't require you to modify the thread's message loop.

Nice. Have you looked at Glimmer?

Very informative article.Thank you author for posting this kind of article .


Both are really good,.
Cheers,
Venkat

Hi, Great.. Tutorial is just awesome..It is really helpful for a newbie like me.. I am a regular follower of your blog. Really very informative post you shared here. Kindly keep blogging. If anyone wants to become a Java developer learn from Java EE Online Training from India. or learn thru Java EE Online Training from India . Nowadays Java has tons of job opportunities on various vertical industry.

very nice and Quality of the Leather Jackets are Avalible at very Affordable rates with
Nice and Comfortable touch and Quality..

The article is very interesting and very understood to be read, may be useful for the people. I wanted to thank you for this great read!! I definitely enjoyed every little bit of it. I have to bookmarked to check out new stuff on your post. Thanks for sharing the information keep updating, looking forward for more posts..
Kindly visit us @
Madurai Travels | Travels in Madurai
Best Travels in Madurai
Cabs in Madurai | Madurai Cabs
Tours and Travels in Madurai

Excellent Blog. I really want to admire the quality of this post. I like the way of your presentation of ideas, views and valuable content. No doubt you are doing great work. I’ll be waiting for your next post. Thanks .Keep it up!
Kindly visit us @
Luxury Packaging Box
Wallet Box
Perfume Box Manufacturer
Candle Packaging Boxes
Luxury Leather Box
Luxury Clothes Box
Luxury Cosmetics Box
Shoe Box Manufacturer
Luxury Watch Box

Thanks for the post. It was very interesting and meaningful. I really appreciate it! Keep updating stuffs like this. If you are looking for the Advertising Agency in Chennai | Printing in Chennai , Visit Inoventic Creative Agency Today..

So informative. I was searching like this for a few days. Thank you for sharing this information.classified ads platform in Bangladesh


Thanks for sharing this valuable information to our vision. You have posted a trust worthy blog keep sharing.


What a fantabulous post this has been. Never seen this kind of useful post.
I am grateful to you and expect more number of posts like these. Thank you very much.

Very informative and interesting content. I have read many blog in days but your writing style is very unique and understanding. If you have read my articles then click below.

How To Make Money On Sports Betting
Online sports betting bsjeon.net is filmfileeurope.com available for a whole หาเงินออนไลน์ host of US and European sports betting markets. Some 1xbet app US states, like Louisiana and New Jersey, septcasino allow